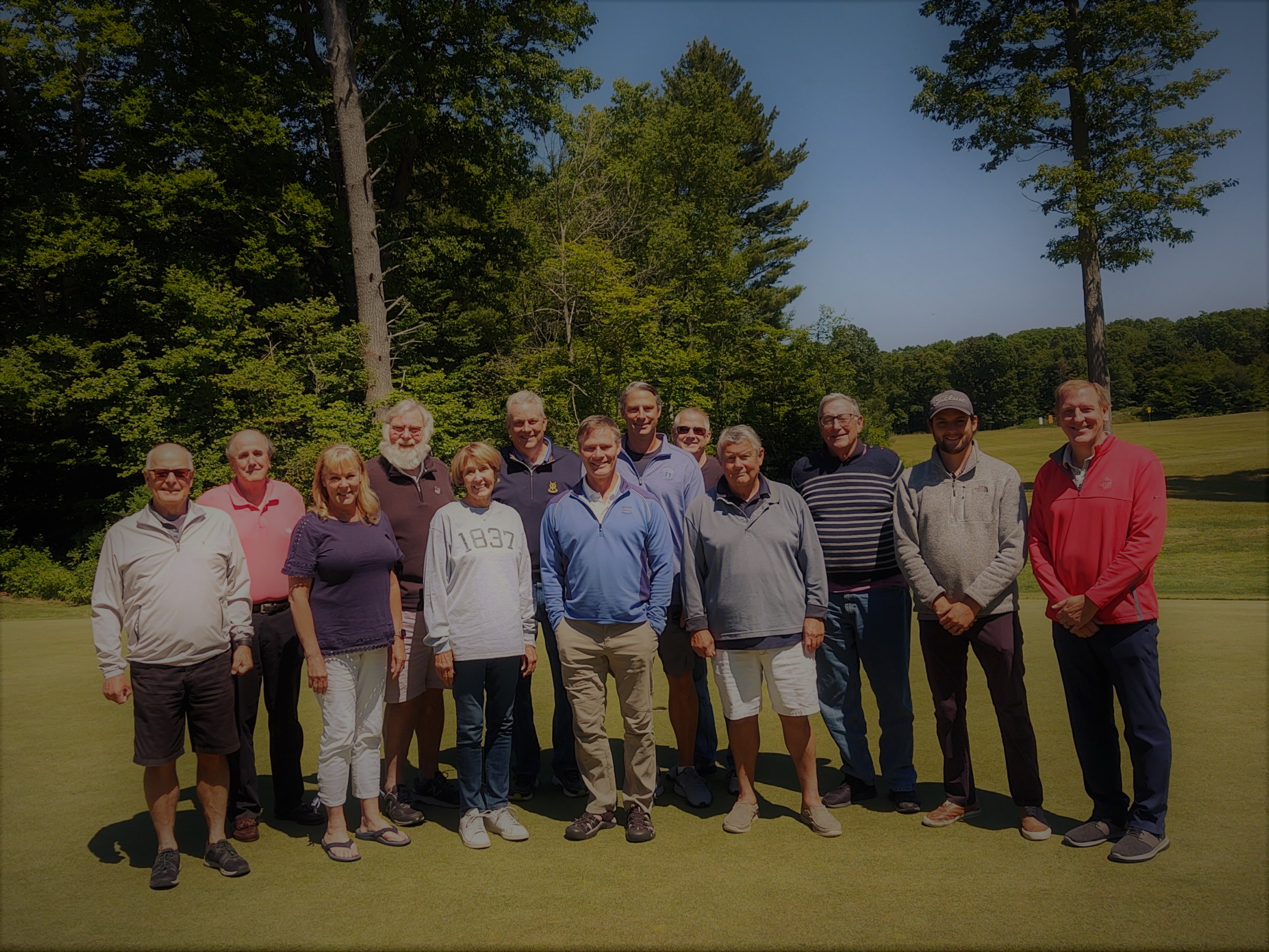 Frank’s history with the White Lake Golf Club began when he caddied for the Club Pro, Lou Iverson, in the late 1950s and early 1960s. He became a WLGC member shortly after graduating from Hope College in 1968.  He served as a teacher for sixteen years and as a principal for 19 years at Reeths-Puffer Schools in Muskegon. After retiring in 2003 he worked for the Horace Mann Insurance Company as a registered representative. On August 18, 2001 Frank became a WLGC Director and on October 9, 2011 he was elected President of the club.  Presently, Frank serves on the Finance Committee and the Golf & Competition Committee.  Frank and his wife, Rita, have resided on the shores of Lake Michigan south of Duck Lake for forty-four years. They spend their winters in the San Diego area where their daughter, Amy, lives.

I grew up In Montague, graduating from Montague High School and later Michigan State University as a Civil Engineer. After working in private consulting, I spent 25 years in the telecommunications industry as a project manager in the facilities group. I joined White Lake in 1979 and have enjoyed almost every minute of it.

Bill has been a WLGC Member since 1981.  He was born and raised in Muskegon and graduated from Western Michigan University. Bill served 30 years in the Air Force as a pilot and commander of various logistics organizations.  He is now an aircraft maintenance consultant for various defense contractors.  He enjoys his old cars in the summer and works hard on his golf game!  He and his wife, Kay, reside in the Whitehall area. Bill is on the Grounds Committee and current Secretary.

What a great journey from vacationing at Lakeside Inn with my parents and brother’s family in the early 70’s to being invited to join White Lake Golf Club by Jim McColl and then becoming the first woman board member. Although golf has been a huge part of my life, my responsibilities on the Greens  and House committees have become my newest challenges. After serving as president of the Ladies Association I became especially interested in beautification of the clubhouse and grounds. I give credit to my golfing family from Springfield, Ohio, my degree in Physical Education from Miami University, my teaching experience at the University of Illinois, and constant and loving coaching from husband, Tom, for any success I may have serving this wonderful club in Michigan paradise.

Hugh R. McCombs (“Rick”), has been a Regular Member of the WLGC for more than 35 years and a board member for over five years.  Rick lives in downtown Chicago with his wife, Katrina Veerhusen, who owns a home at Michillinda that has been in her family (Getz) since 1894.  The Evan McCombs Practice Facility is named in memory of their deceased son.  They also have a daughter, Claire, who lives and works in New York City.  Rick is a member of the Board’s Finance and Grounds Committees and acts as the Board’s legal counsel.  Rick was a trial lawyer in Chicago for more than 40 years and is retired from the international law firm Mayer Brown LLP.  He continues to practice occasionally as the Law Office of Hugh McCombs LLC and both he and Katrina are active private investors.

Michelle grew up in Iowa and attended the University of Iowa’s School of Dentistry, which is why you see her on the golf course with her black and gold Iowa Hawkeye golf bag. She graduated in 1982 from Dental School, completed a General Practice Residency in Chicago at Rush while her husband completed his Emergency Medicine Residency at Christ Hospital. They moved to North Muskegon in 1985, she joined White Lake Golf Club in 1986 and has been a member ever since. She and her partner own their own practice, Northshore Dental Associates in North Muskegon. Michelle and Gerry have 3 girls who are in various health care fields. She was invited to become a member of the board in 2016 and took over as Membership Chair when Jim McColl retired from the board in the fall of 2017.

Ryan was born and raised in Spring Lake. Ryan is a graduate of Michigan State University and Business Partner and Manager of Pitkin Drug in Whitehall. He and his wife, Dee, have 3 children and reside in Whitehall. Ryan is the Chairman of Shelby Bank and continues to be actively involved in Rotary, Chamber of Commerce, Yacht Club and Covenant Church. Besides golf, Ryan enjoys boating, snow skiing and fishing.

Jim grew up in Midland, Michigan where he met his lovely wife Lisa. They have 3 children: Amanda, who is a Counselor in the Detroit area, Colin who is a Naval Architect in the Knoxville area and Devin who is an Educator in the Grand Rapids area. Jim moved to the Whitehall area in 1999 after working as an Emergency Physician in Myrtle Beach for 3 years. The journey also included graduating from Adrian College and MSU College of Human Medicine, serving 3 years in the Navy, and an Emergency Medicine Residency at MSU/Spectrum Health. Jim fell in love with the lakeshore area as a young boy and remains enamored with the White Lake Area since establishing roots just south of the Duck Lake channel. He and Lisa joined the WLGC in 2001 and Jim was elected to Board in 2017. He serves on the Membership Committee. Jim works as an Emergency Physician and Chief Medical Information Officer for Spectrum Health. In addition to golf, Jim enjoys biking, boating, kiteboarding, snowboarding and fishing.

Charlie grew up in Cincinnati, Ohio but moved to Michigan to attend graduate school in 1973 and then to work as a school psychologist for 32 years in Ionia County and Whitehall for three years. Following his retirement he and his partner Sal (Sally) moved to the White Lake area to be closer to his family cottage in Sylvan Beach. Charlie has never missed a summer in White Lake and now enjoys life along the lakeshore on a fulltime basis. Besides golf, Charlie enjoys travel, photography, and visiting with his family as they rotate through the family cottage all summer long. His two daughters and their families have also relocated to Grand Rapids and spending time with them is a priority.

Don has been a member at White Lake Golf Cub since 2016 and a Board member since 2019 and is also a member of the greens committee. Don attended Ferris State University and later worked for a design and engineering company in Grand Rapids, MI specializing in the design and sales of Industrial Automation primarily for the automotive and office furniture industries. Don and his wife Mary are lifelong residents of Muskegon County and now live in Laketon Township. Don is an avid golfer and is always looking for ways to improve the golf course for the enjoyment of all.

Frank grew up in Norton Shores and graduated from Mona Shores High School in 1980.  He earned a degree in Engineering at Duke University and then an MBA from Northwestern University.  Frank married Barbara Valk, also a Mona Shores graduate, in 1986 and together they have two boys Colin, in Virginia and Aaron, in Texas.  During his career in manufacturing, Frank and his family moved around the eastern half of the country and lived in Flint, MI, Evanston, IL, Aiken, SC, Danville, IL, Peachtree City, GA and Houston, TX.  Frank and his wife Barbara moved into their home in Whitehall for the summers, and joined WLGC, in 2015.  They returned permanently to Muskegon County from Houston, TX in 2018 and are enjoying reconnecting with family and old friends in western Michigan, and making new friends in the White Lake area.  Frank is an avid golfer and is excited to be a new member of the WLGC Board Finance Committee.